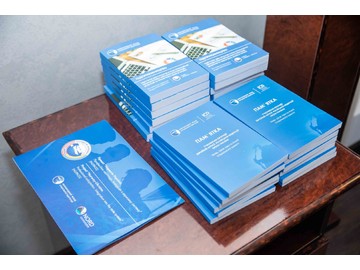 The International Foundation for Social Adaptation, in cooperation with the Ministry of Veterans Affairs of Ukraine, the Ministry of Education and Science of Ukraine, is starting a new stage of the "Norway-Ukraine" project on social and professional adaptation of veterans, their family members and the families of the deceased.

The basis for the joint implementation of the project is the Memorandums of Cooperation of IFSA and the Ministries dated November 29, 2021.

The components of the project are: retraining on short-term courses with a volume of 350 study hours on the basis of leading universities of Ukraine, which have cooperation agreements with the Ministry of Veterans Affairs of Ukraine, social adaptation and legal assistance, promotion of employment and creation of one's own business. These functions are performed by public organizations and foundations - partners of universities in the implementation of project tasks.

The IFSA and the ministries are participating in the creation of veteran development centers based on selected universities, which will in the future be centers for combining the efforts of ministries and interested organizations to create a state system for social and professional adaptation of veterans, their family members, and the families of the deceased.

The directions of professional retraining and curriculums are developed by universities and NGOs, agreed with the veteran community in the cities where the project is implemented, IFSA and approved by the Norwegian project partner: Nord University.

The approved directions of professional retraining in the second semester of 2022 are the following:

Uzhhorod, Uzhhorod National University – “The basics of entrepreneurship: starting of own business”

Uman, Uman National University of Horticulture, “Organization of own business in the agrarian sphere”